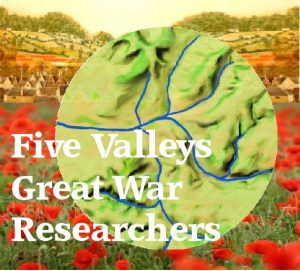 In 2014, several local history groups in and around Stroud’s five valleys joined together to research the events of the district during the Great War. The 5VGWR logo uses a detail from an anonymous 18thC painting in the museum that shows the Stroud Scarlet cloth in rack fields above the town, merged with poppy fields for WW1, and a map of Stroud’s five valleys.

Over time we are adding the 5VGWR research and exhibition material to our cloud archive. If you want to go straight to the cloud archive please click here: WW1 archive

Members of the Five Valleys Great War Researchers came from:

Amberley Archives – contributed regularly to exhibitions and events, with particular interest in school pupils and what happened to their teachers (the researcher transcribed all the available school log books). Their research into Major General Fabian Ware (originator of what became the Commonwealth War Commission) will be part of our Peace At Last exhibition. The village has its own website here: https://www.amberley.org.uk/

Chalford Parish Local History Group – this recently-formed group of researchers https://www.chalfordparishlocalhistorygroup.org.uk/parish/world-war-i/ provided the editor of our book, who also wrote a blog throughout the centenary years based on many sources including original bound volumes given to us by our local newspaper, the Stroud News and Journal: https://greatwarchalford.wordpress.com/2013/07/28/entering-the-past/

Minchinhampton Local History Group – we much regret the death in 2020 of the representative from Minchinhampton. Di Wall was an active and effective Chair for our group and a superb researcher and teller of stories. Her research is currently inaccessible and the Society may close

Nailsworth Archive – it was a researcher from Nailsworth who launched the joint research project that became the Five Valleys Great War Researchers. The Society’s website is here: http://www.thenailsworthsociety.co.uk/

Remembering Rodborough – In 2014 Remembering Rodborough, a community-specific local history group, undertook to research the 60 names on the Great War memorial located inside St Mary Magdalene Church, Walkley Hill, Rodborough. Over the next four years the group involved the whole community in several projects, to everyone’s satisfaction. Their research and activities are described here: http://www.rememberingrodborough.org.uk/ww1-2/

Stroud Local History Society – since other researchers were separately recording the memorials in and around the town, SLHS concentrated on the effect of the war on Stroud’s home front – industries, schools, society – the archive, and that of the wider 5VGWR team – is accessible through this webpage: https://www.stroudlocalhistorysociety.org.uk/research/ww1/

Woodchester Historical Society – Woodchester is the location of the Wayside Cross – erected at the Dominican Priory in mid-1917 as a focus for grieving families and visited by many as the war continued. There are several walks around this small hillside village, now including some that visit key places during WW1: https://woodchesterhistory.weebly.com/lest-we-forget.html

and the curator of Stroud’s Museum in the Park https://museuminthepark.org.uk/ helped regularly with loans of artefacts and local information.

Many started by researching the names on their local war memorials. The results were amalgamated in a district-wide database assembled by Steve Pitman of Remembering Rodborough. You can search the list, and several other archives from the link at the top of this page.

December 2014 – Stroud LHS concentrated on the home front, inviting stories from local residents in a series of drop-in sessions in the local library. The outcome was an SLHS exhibition called Unintended Consequences which toured the district libraries in 2014, was displayed in the Town Council window, and became part of the archive of the Five Valleys Great War Researchers. 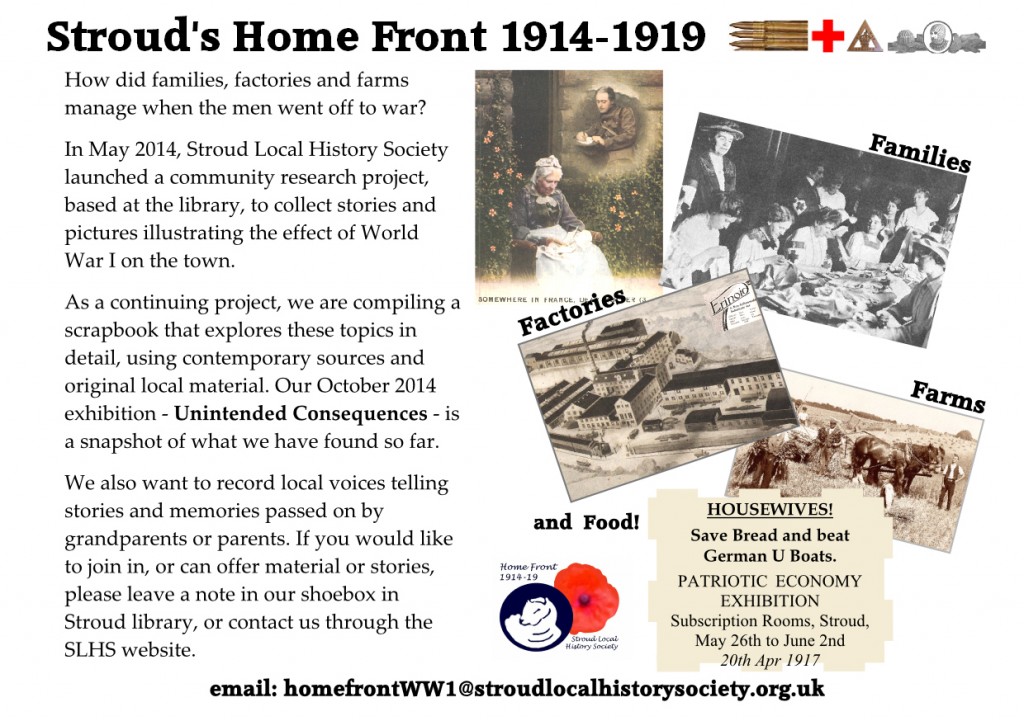 December 2014 Addenbrooke’s Hospital – the local radio station in Cambridge broadcast the hospital choir singing a vesper hymn in St Mary’s Church. The hymn had been written in 1917 by a Stroud soldier being treated at the hospital, and found in an old diary in 2014. The congregation included members of Jack Smith’s family thanks to very speedy collaborative research!

June 2015 Brimscombe – The Stroud District and its part in the Great War – over a weekend, including talks, slideshows, demonstrations and displays by several local organisations. The visitor who travelled furthest came from New Zealand, having written a book about three brothers from Brimscombe who had been killed in France.

July 2015 Museum in the Park – Innovations and Technology display of Stroud’s WW1 industries by SLHS in partnership with the Museum, which focussed on a different WW1 topic for each year.

Nov 2015 Old Town Hall, Stroud – a small display to accompany a performance of ‘Gallipoli – A Forgotten Story…. Or Two’ by John Bassett of Spaniel in the Works, a Stroud theatre group.

Link to other (not WW1) SLHS exhibitions