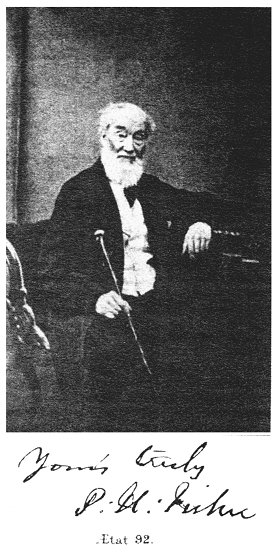 Paul Hawkins Fisher was born in February 1779 – we know that for certain because he wrote it (retrospectively!) in one of his many diaries. They were transcribed by the Stroud News in December 1899 in long instalments, as that century drew to a close. Tony Macer and Marion Hearfield came across these transcripts in the newspaper microfilm quite by chance a couple of years ago when researching William Cowle, and Elizabeth Wright, a local historian and backroom helper at the Museum in the Park, heroically transcribed every entry again. We have since turned her transcript into a PDF, which is available on the internet using this link. Click it to open a new tab in your browser from which you can read and download the diary.

Fisher used these diaries as the basis for his Notes and Recollections of Stroud, a book first published in 1871 and which is still re-published, nearly 150 years later. It is a source of constant delight and information for local historians. In 2014 the Museum in the Park was given a bound draft of the Notes, assembled and annotated by Fisher, so it was about time that we wrote about him.

We know he became an Articled Clerk in 1795, at the age of 16, because a copy of his Indenture survives.

His family was involved in various activities and businesses in Stroud during the 18th and early 19th centuries, and Marion Hearfield assembled a story about his parents and siblings because they popped up as buyers in the early development of The Field estate. If you want to know more about this Fisher family in Stroud: his father Benjamin Fisher, brothers Benjamin Fisher, Joshua Fisher, William Fisher, John Fisher, Charles Hawkins Fisher, Henry White Fisher, Joseph Timbrell Fisher and Samuel Fisher, or his ??great-nephew the architect and surveyor William Henry Cox Fisher, you will find it here: FISHER family