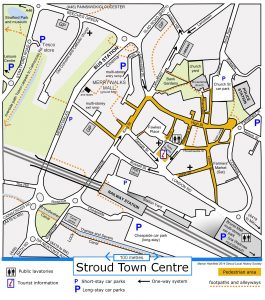 If you would like to learn more about Stroud, while you walk around town, try the

Tip – if the printed version does not have the correct symbols ie arrows and a picture of an eye:

NOW YOU CAN DO THE VIRTUAL TOWN TRAIL AT HOME

From the lake, leave Stratford Park, and cross the road.
With Stratford Lodge, now called Old Nelson, on your right, walk up the slope and turn right passing St.Roses. Walk down & onto the footbridge.

This was Badbrook . In the early 1800s there was a ford and stepping stones to cross the stream.
To your left is the Old Police Station 1858.

Badbrook House was located on the corner of Merrywalks and Beeches Green and was demolished to allow for road widening in 1967. Badbrook Mill stood partly on the site of the multi-storey car park in Merrywalks.

At the other side of the bridge go down the slope and turn left. Find swags & flowers at the old pub. 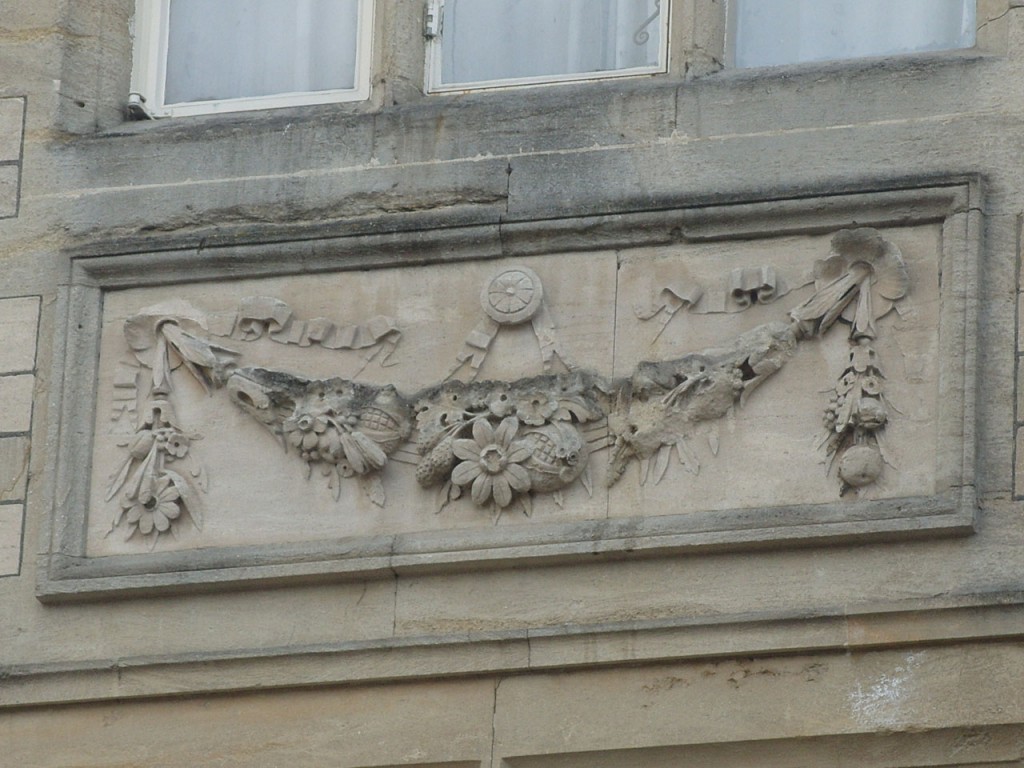 When was it re-built? Look for faces. 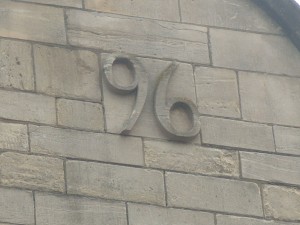 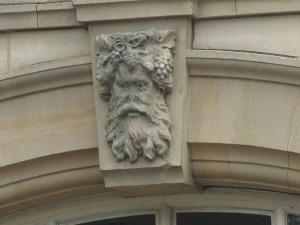 Turn right and walk up hill, past the longest serving monarch.

At the Racing Dog (rebuilt 1903) – Where is the Godsell brewery trademark ‘Labore et Honor’ malt shovel clasped in hand? The Museum in the Park’s reception area has a Godsell sign with their trademark and a leaping salmon – the brewery was at Salmon Springs.

Turn left into Lansdown (previously this was the carriage drive to the vicarage (where the library is now).

At the next junction – Look for famous Victorian scientists and artists. Also find Victoria and an engine.
The School of Art & Sciences (1890-99) housed the original Stroud Museum.

Return along Lansdown to a local newspaper office and take the steps opposite, by Lansdown Hall (Temperance Hall, built in 1879, later the Stroud High School for Girls started here), to enter Bank Gardens (the gardens to Bank House ).

Walk up to St Laurence. At the church porch turn right.

There was a chapel before 1279. The current church was rebuilt in 1866, but the 14th century tower and spire survive. Richard Whittington acquired the manor of Upper Lypiatt (which included Stroud) in 1395, to settle a debt of £500. A relative of his was buried in the old chapel.

Go into The Shambles. When did John Wesley preach a sermon here? 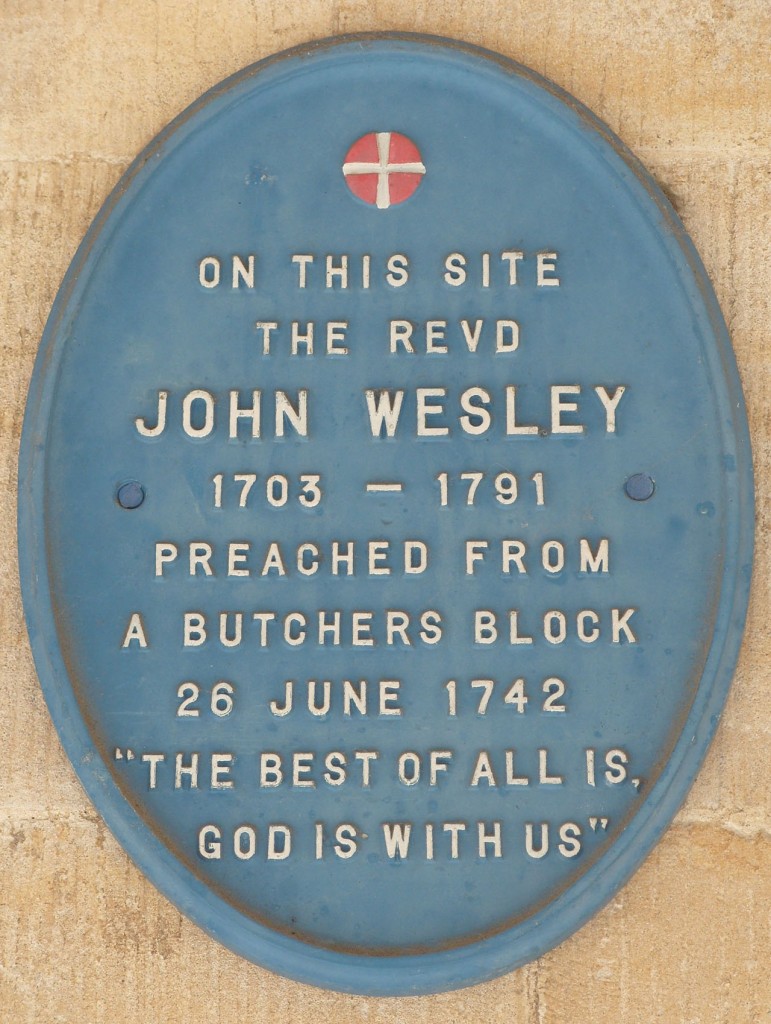 The Old Town Hall (1590s with additions) was originally freestanding in the centre of the market area, which was known in the 17th century as ‘the Pitching’. Later this became ‘The Shambles’, where the butchers sold their meat on tables that dropped down from the wall.

When was John Canton born? 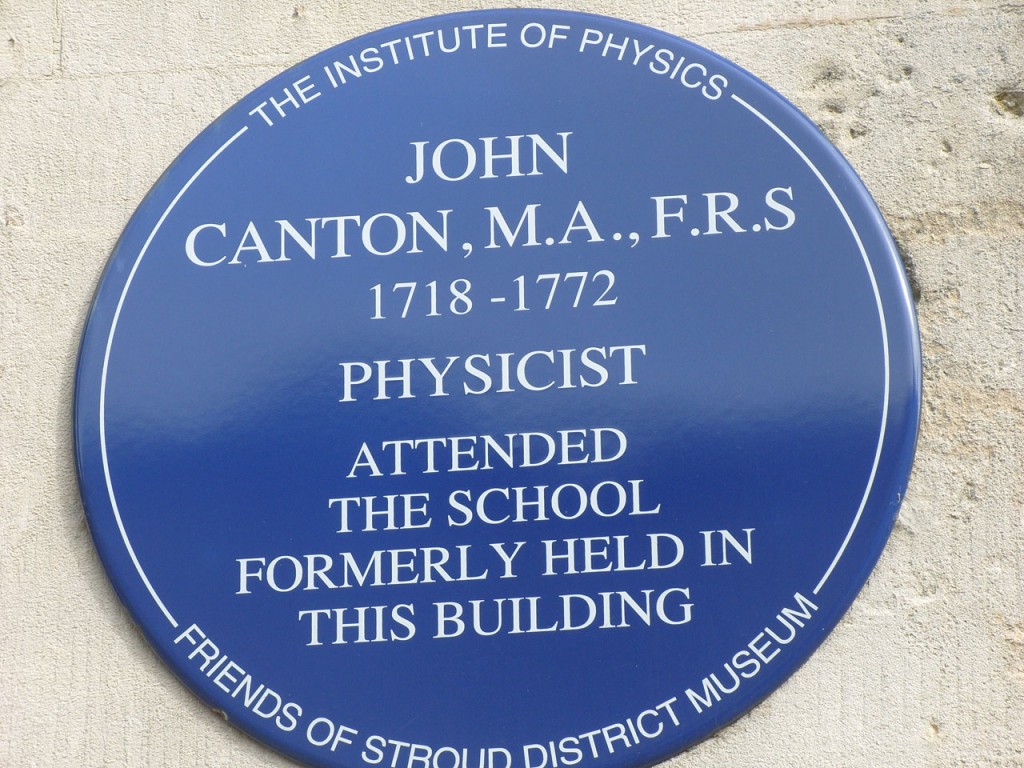 Continue through to The High St.

No 57 – then Coley Chemist, now Boots – was the first premises in the town centre to have electricity (from a gas engine)

Walk uphill towards 1931 cleaning, to the sculpture representing the Stroud area.

Here was The Cross, the old centre of town, with the town well (later converted to a drinking fountain) & the stocks.

What sort of market was held here? 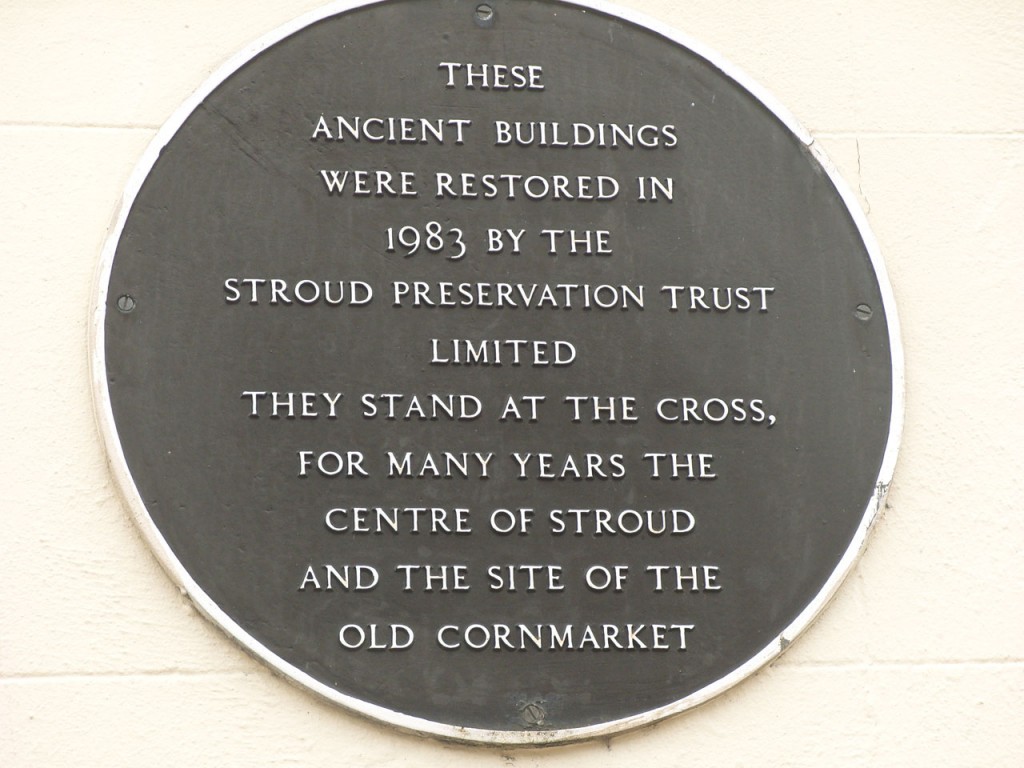 Go back down the High St to Woodruffs. Turn right, into the street where sewing machines were used to produce ready-made clothes.

Turn left at the end. This used to be Kendrick’s orchard until 1872. 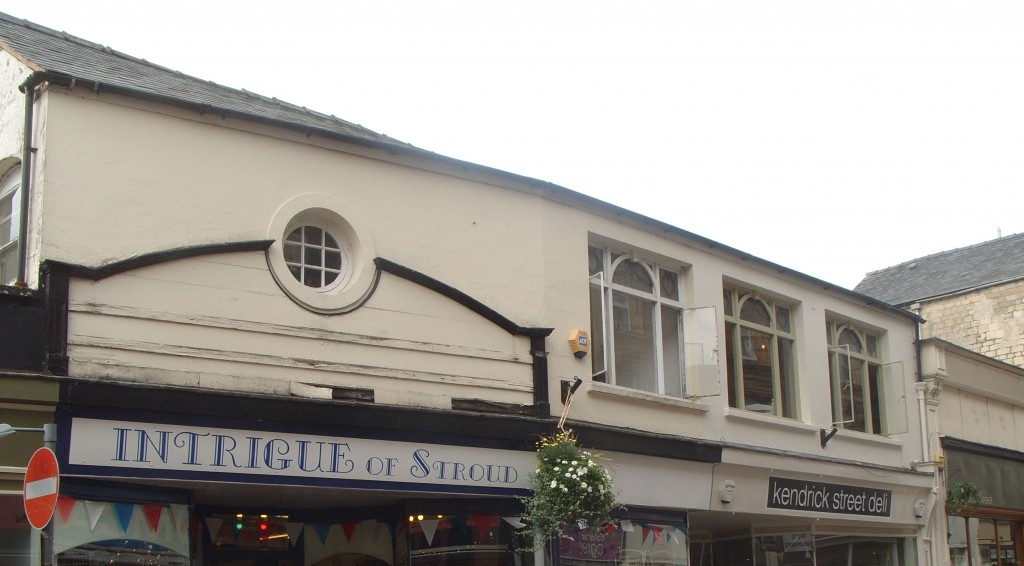 Walk towards the pretty birds.

Do you remember when Peckhams was on the left (World Foods) and The International Stores was on right (Peacocks)? Previously it was Wycliffe garage, before it moved to Cainscross.

Find 4 faces that tell you what time it is. This was given to the town by Stroud wine merchant William Sims, in 1921.

Take ‘Lord John Russell’s St’. He was a Liberal MP for Stroud, 1835-41 and Prime Minster twice.
Pass his pub, which was the General Post Office 1886, and turn left to where you can catch a train.

Isambard Kingdom Brunel’s Goods Shed was built in 1845 (the station was rebuilt in 1914).

The tree on the platform was saved by people-power. It  belonged to a house that was demolished to build the station.

Carefully cross to the black horse

George Holloway (MP for Stroud 1886-92) was a leading industrialist and politician, who pioneered the manufacture of ready-made clothing and introduced a number of social reforms to Stroud

With the black horse on your left, go straight on until you reach Coventry.

This used to be The  Green Dragon. To see old pictures click here and use quick the search for ‘Green Dragon Hotel’ High up you will find faces 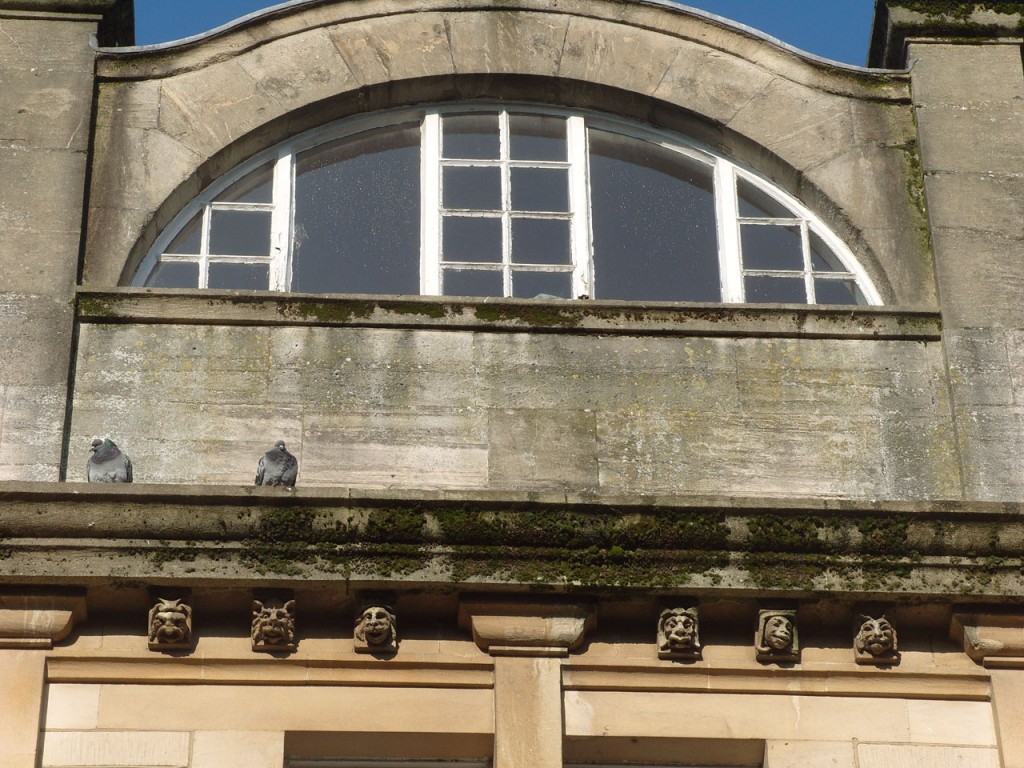 Near Wilkinsons, find Stroud landmarks – which have you seen today? More information about the Stroud area

The Town Trail was prepared by Pauline & Dave Stevens for the 2013 Stroud Local History Society exhibition.

All photographs by Pauline Stevens April 2010 or July 2014