PROFESSIONAL PHOTOGRAPHERS OF THE STROUD AREA 1856 -1939

The purpose of this short study is to lay the foundations for an index of the professional photographers working in the Stroud area before the Second World War. My research was based on two main sources, surviving examples of photographers’ output and trade directories. Some work was also carried out on National Census Returns for the period 1851 – 1891. Clearly, however, for a study of this subject to be definitive, detailed analysis of newspaper archives, probate and other classes of record would also be necessary. Within the time currently available this has not been possible. However, it is hoped that future students of local history will build on what is included here. Additional information will be most welcome.

The following list of photographers is divided into two sections, covering time periods of roughly equal length. The first of these runs from the late 1850s up to 1901, the second from 1902 to 1939. That the break between the two is marked by the end of Queen Victoria’s reign is coincidental. It is, in fact, determined by the arrival of the full-size picture postcard, for it was in 1902 that Post Office regulations first permitted the use of the whole of one side of a postcard for the image. Previously the address had enjoyed this privilege,
while the picture and the message had to share the space on the other side. This concession, of course, led immediately to a huge increase in the manufacture of picture postcards and encouraged large numbers of photographers, nation-wide, to produce them professionally.

In using the index the following points should be noted.
1. In order to make clear the extent of a photographer’s output, his work is listed on a scale ranging from rare to prolific.

2. Many photographs carry no photographer’s signature, so their origin must remain unsure.

3. Some photographs carry only a set of initials, or unknown handwriting. Such examples have not been included.

4. Several photographers, such as P.L. Smith, were not full time. If they sold their work
professionally they are listed below, although they will have earned their principal income in other ways.

5. The name printed on the reverse of many postcards is that of the publisher or vendor. If it has not been possible to prove that he was also the photographer, his name has been omitted.

SECTION A: PHOTOGRAPHERS WHO STARTED WORKING BETWEEN 1856 and 1901

Ainsworth, W. Nailsworth? c. 1890
Ainsworth describes himself as ‘West of England Photographer’. The location of his studio is not known, but a few photographs of Nailsworth people and locations exist. Rare.

Hughes, F Stroud c. 1870 – c. 1885
(See also Calcott, Tongue, Ruffles H.G. and Pym W.H. Douglas.)
This group of photographers might be called the Swan Street Group, since they all worked there in various combinations and signed their photographs as follows: F Hughes, Hughes and Calcott, Calcott and Tongue, Tongue and Ruffles, W.H. Douglas Pym. All are uncommon.

Latham, R.M. Stroud and Nailsworth c. 1889
Listed at Nailsworth in 1889 directory; the back of one photograph says 7 George Street Stroud. Rare.

Merrett, George and Mark. Stroud 1884 – 1940s
Traded as Merrett Brothers; George left the business in the 1890s; business began in Exchange Buildings, a wooden structure in the Corn Exchange yard off the High Street; later at top of Russell Street; additional premises at 7 George Street; Mark retired in 1923, but continued business for some twenty years in his home in Belle Vue Road. Prolific.

SECTION B: PHOTOGRAPHERS WORKING BETWEEN 1902 AND 1939

Liddiatt, George Victor. Kings Stanley c. 1910
Several postcards of Leonard Stanley exist and include the initials G.V.L. Although they are of the neighbouring village it is assumed that they belong to G.V. Liddiatt who ran a cycle dealership in Kings Stanley. Rare.

Major, Frederick. Bisley c. 1905 – c. 1915
Major produced two series of postcards, the printed ones signed. Real photographic postcards are recognisable by his distinctive handwriting on the fronts. Both series are common.

Peckham, Edwin Charles. Stroud c. 1920 – 1959
Born 1887 Cirencester; studio in King Street 1920 in partnership with his father-in-law, W. Dennis Moss; moved to 10 Russell Street in 1924 and continued the business in his own name from 1929; topographical views, portraits and postcards. Prolific.

Restall, Gilbert? Bisley c. 1910
Postcards say simply Restall, but are thought to be the work of Gilbert Restall, who was licensee of The New Inn, now The Stirrup Cup. Fairly common.

Young, K. France Lynch c. 1910
Real photographic postcards. Young was probably a photographer, though it is possible he merely published the postcards that bear his name. Rare.

Acknowledgements:
I am grateful to Wilfred Merrett for his help and advice and to my wife, Sylvia, for typing the text.
Examples of photographers’ handwriting. 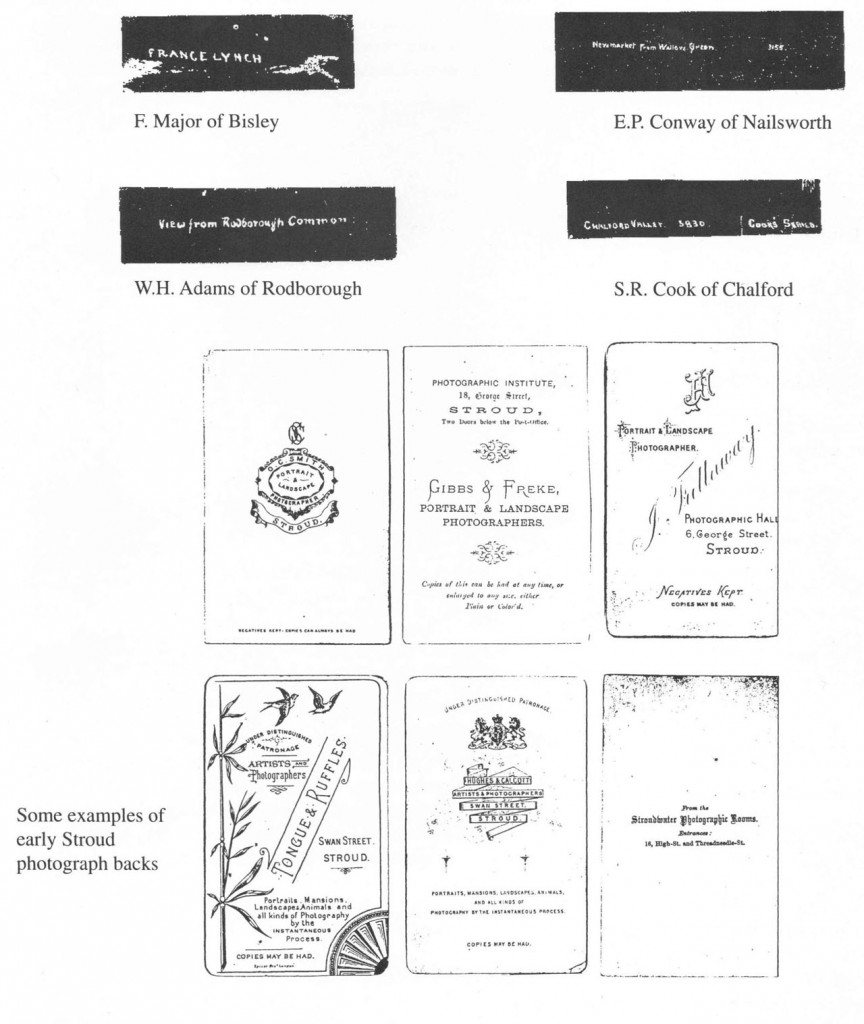