On the corner of Trinity Road and Whitehall a sign has been painted over – Marion wondered what it said: 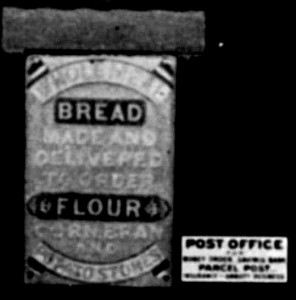 1886 – the bakery and house was auctioned by the Stroud Provident Building Society to clear the bankruptcy debts of William UNITT.

Lot 2: A DWELLING-HOUSE adjoining lot 1 and facing Whitehall, containing Sitting-room, Kitchen and back-kitchen, three Bedrooms, and Out offices, now in the occupation of Mrs Herbert, at an annual rental of £9.
For further Particulars apply to the Auctioneer, or to Messrs Winterbotham and Son, Solicitors, Stroud.