SLHS members display their research in various locations and the Society puts on at least one large exhibition a year. Here are some of the events we have organised, or been involved in: 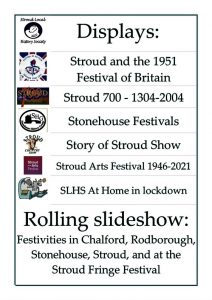 2021 (August) SLHS Exhibition at the Museum in the Park 2019 (September) SLHS Exhibition at the Museum in the Park

The focus of this year’s exhibition was public transport, which was enhanced by the Stroud Vintage Transport and Engine Club, who provided not only two highly-detailed displays but also two visiting vintage buses. We had many visits from former bus drivers during the week, who were delighted to see their old bus station manager, Chris Blick, dressed up in his conductor’s uniform, when he took a turn to steward the exhibition. A linked display looked at Stroud’s early roads and turnpikes, with rolling slideshows continuing the public transport theme.

We also had “That Shop In…” with contributions from other local history groups. Howard Beard produced two displays – one showing 20 Stroud shops over time and the other a delightful exposure of his Lee family relatives in their many occupations as shopkeepers over the turn of the century. We had over 700 visitors during the week and were once again given useful additions to our research archives.

We looked at what was happening in Stroud in the 1860s – what was here and what was yet to come – because the church presented a major new exhibition of the HISTORY OF THE PARISH CHURCH to coincide with the 150th anniversary of the opening of the rebuilt church in 1868 (the 14th century tower and spire remain).

This year our exhibition was in the Parish Church in the centre of Stroud and we went back to the 1960s. We had memories from members who recalled life in Stroud then; shop adverts and pictures, by street; schools and events. We heard a lot of “ I remember that!”

Also on display were

The Stroud 700 quilt was found and exhibited; there was a rolling slideshow and a story table with files to browse; the Book stall (new and second-hand) sold well. Over 1,000 people came to see our displays, and several brought more stories and questions. 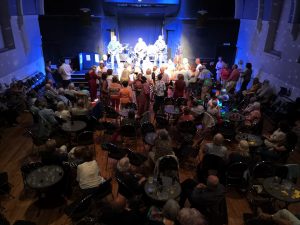 mdeSomeone said we should have 60s music to go with the Stroud in the 1960s display, so we hired Lansdown Hall and local band The Boogie Bop Boys. It was a great night – great venue, great band and selection of songs (we knew all the words), and the audience had a great time – they sang and danced (some nifty footwork), and there were some great 60s outfits. We had 60s sweets and prizes – it was great fun!

2017 (July) – Summer Exhibition at the Museum in the Park

This year’s Summer Exhibition told stories of Holloway Brothers’ Clothing Company, and why George Holloway has a statue in Stroud; Schools in the Stroud district, by ten local history groups; The magnificent 1911 pageant; Everyday life in Stroud during WW1; and pioneering balloon ascents. SLHS members were available to answer questions and collect stories. Rolling slide-shows and a book sale provided the opportunity for a quiet sit down. Our books and the new ‘Then and Now’ cards were on sale

2016 (July) – Summer Exhibition at the Museum in the Park 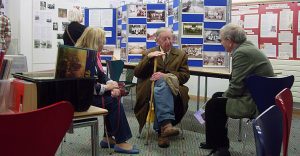 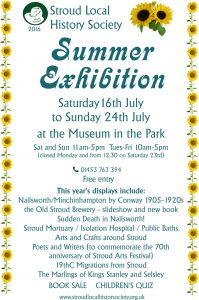 We  displayed SLHS members’ research into Stroud’s Public Baths, isolation hospital and mortuary (Liz Wright), 19thC emigration (Marion Hearfield), the Marlings in King’s Stanley and Selsley (Peter Griffin), and the Arts and Crafts movement (Jenny Bailey). Over 150 of Conway’s photographs (1905-1920s) illustrated the Nailsworth/Minchinhampton area (Howard Beard) together with his sinister new tale of Sudden Death in Nailsworth. A display about local poets and writers (Sue and Barry Harrison) helped to celebrate the Stroud Arts Festival’s 70th anniversary and Marion Hearfield’s new book – a history of the old Stroud Brewery (written for SLHS) – was launched. A rolling slideshow about the old brewery gave visitors the opportunity to sit down and a Children’s Quiz (Dave and Pauline Stevens) kept young visitors occupied. Many other members helped to steward the event during the week and answer questions. About 600 people came to browse and we were offered useful new stories and photographs.

One afternoon, our own Lionel Walrond gave an impromptu seminar on Stroud’s mediaeval roads, and on another afternoon Marion Hearfield ran a workshop on reading old manuscripts. It was a busy week!

Display in the Town Council Office window – Princess Elizabeth came to Stroud in 1950 (more here), and a Stroud school girl kept a scrapbook of the occasion 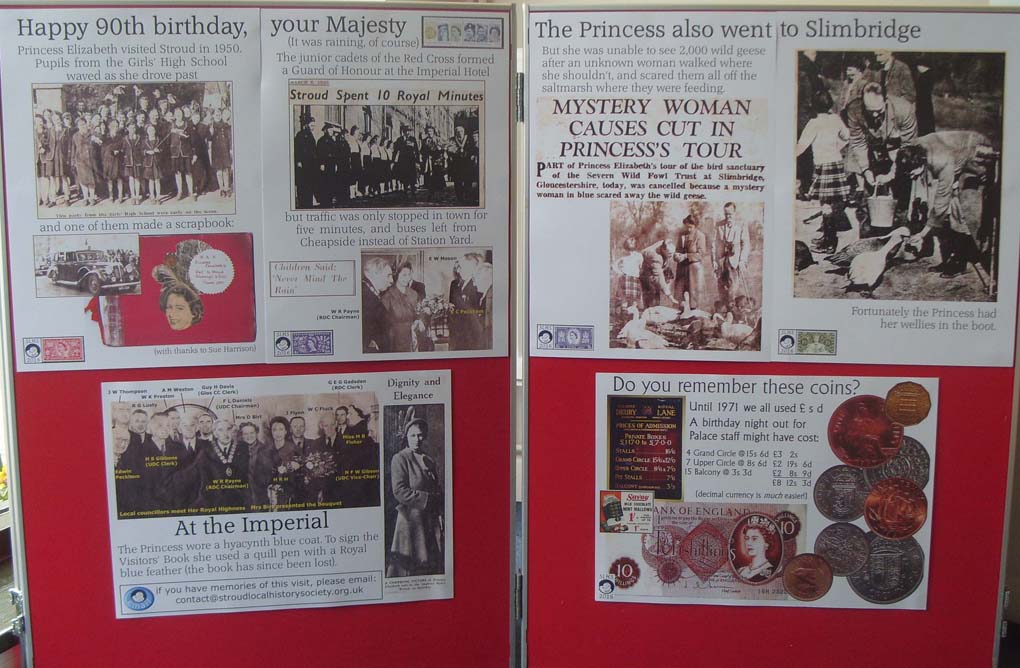 2015 (July) – Summer Exhibition at the Museum in the Park 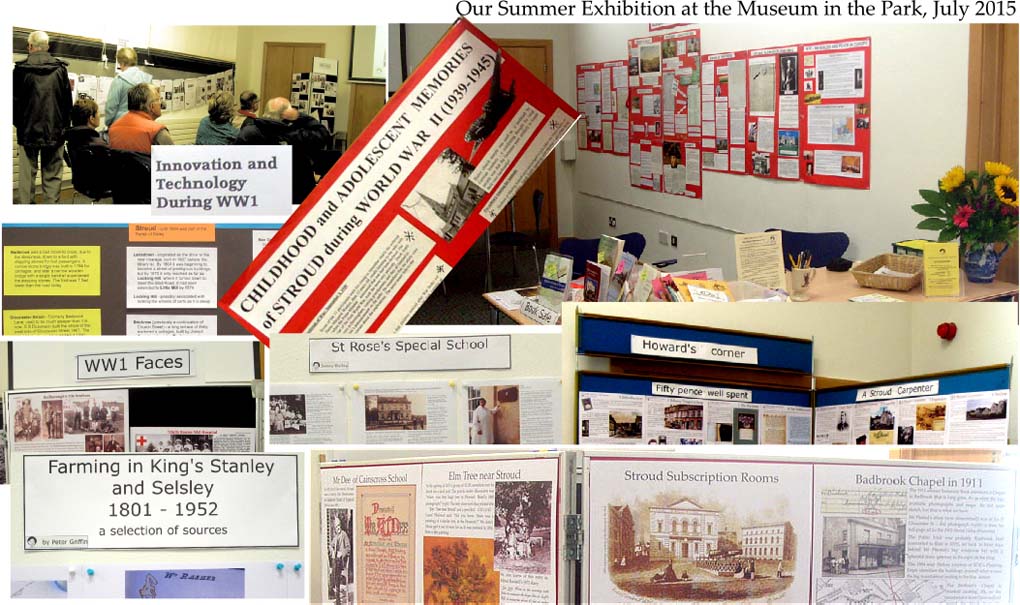 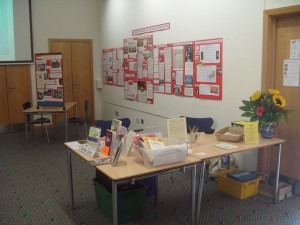 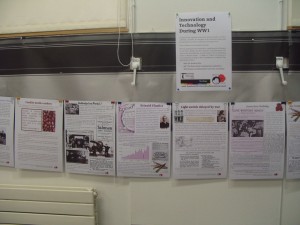 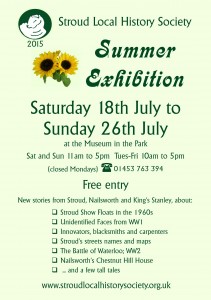 Once again, our Summer Exhibition at the Museum in the Park was a great success. We had 638 visitors during the week, quite a few of whom came back to make sure they saw everything. Fifteen members provided stewarding services between them and Our Visitors’ Book quickly filled with questions, requests, offers and compliments, and many people took away our Society programme. We sold copies of the books published by the Society (and some that weren’t) and featured in the local newspapers and on Radio Gloucestershire.

The exhibits were: Farming in King’s Stanley by Peter Griffin, Memories of Stroud during WW2, and Gloucestershire and the Napoleonic Wars, by Sue and Barry Harrison, Streetname Origins by Pauline Stevens, the story of St Rose’s by Jenny Bailey, two displays from our WW1 Home Front research by Marion Hearfield, a number of short stories and tall tales researched jointly during the past year and, in Howard’s corner, three stories by Howard Beard about Chestnut Hill House, carpenter William Beard and blacksmith Henry Pearce – and a display of artefacts from the Pearce family. Howard also showed some old photographs of the town in Do You Remember…? The slideshows – especially Pauline’s Town Quiz and Jenny’s slides of Stroud Show Floats – were very popular and gave visitors a welcome opportunity to sit down and relax. “What riches there are in our town” said one visitor – “what an excellent and informative exhibition”.

Some of the display information is on our website:

The centenary decorations, by Howard Beard and Sue Harrison,

and glittering ribbons of quotations from his stories and poetry.

Members Barry Harrison and Jenny Bailey contributed material to the FESTOMANE week of exhibitions and events at the Leisure Centre and Museum in the Park. 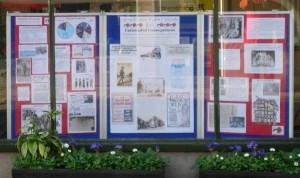 This exhibition is the first that has resulted from our ongoing research project into the lives of the townsfolk during the Great War.  The full display was launched at the GLHA exhibition at Pate’s Grammar School in October 2014. Then a selection went to Stroud and Nailsworth libraries, and another small part to the Stroud Town Council window in January 2015 (photo left).

The Home Front research topic for 2015 is Innovation and Technology; more on our project page here:  Link to Home Front Project

2014 (July) – 30th Anniversary exhibition at The Museum In The Park, Stroud

This year we packed Gallery 2 with displays by present and past members covering subjects as varied as holidays and workhouses. Following the success of the 2013 exhibition the Museum staff suggested that this year we extend the exhibition beyond Stroud Show weekend, and we had over 500 visitors in the 8 days.

SLIDE-SHOWS:  Was it really 30 years ago? / Subscription Rooms – the first 90 years / Stroll round Stroud in 1937 / Domestic life in Victorian Stroud

Stroud Local History Society linked in with Stroud Country Show in July by mounting an exhibition of past and present projects undertaken by society members. The exhibition was a collaboration of SLHS with the Museum in The Park. Displays were varied. Jenny Bailey’s contribution included a survey of the Summer Street district of Stroud, its history and the story of its community life; also a study of immigration into the area by people of eastern European descent. Susan and Barry Harrison covered Sport in Gloucestershire through the centuries, local connections with the Napoleonic Wars, Railway Reminiscences and the Uplands, Stroud. Barry also had a display about ‘The Man who took Stroud’s Temperatures’ and his research into Thomas Hughes (1742-1813) who was born in Dursley. Thomas Hughes was an apothecary and surgeon who moved to Stroud in 1771, and who kept detailed weather records up to the year of his death in 1813. His weather diaries provide a major contribution to what is known about the climate of the late 18th century.

Marion Hearfield contributed to the exhibition with material concerning the major research project she and Tony Macer have carried out into the history of William Cowle, a nineteenth century benefactor of Stroud, whose life, business interests, pastimes and property developments in the upper part of the town, are the subject of a new book (on sale through our own website). Her October exhibition ‘The Cowle Legacy’ was repeated at Stroud library in December, and at Glos Archives in April/May 2014. There is a link to the research, and to the online archive, on her website pages at www.johnhearfield.com

Howard Beard displayed project work, mostly based around early photographs, of local Edwardian events such as the 1907 visit of the County Agricultural Show, the great 1911 Mid-Gloucestershire Historical Pageant of Progress and George V’s Coronation; also pictures from a century ago of Stroud shops and street scenes, together with letterheads and humorous postcards. Around 270 people visited the exhibition which appears to have been much enjoyed.

John Wesley, Founder of the Methodist Church; Together with His Brother Charles (includes Salvation Army);  George Whitfield, the Great Awakener

Rodborough Tabernacle; Provoking the Puritans; The Baptist Cause

Young People and the Chapel; Sunday Schools; Past Preachers and People; Stonehouse Congregational Church; Letter of Rev B Parsons, Ebley

We worked for The GWR; We lived by the Railway; Railway Children

The pleasure of Travelling by Steam; Stroud Station – Steaming with Activity

The Ups and Downs of the Swindon-Gloucester Line

Exhibition celebrating Stroud beginnings and as a separate  community since 1304  (many local societies took part). The Stroud 700 Wall hangings are in Old Town Hall, The Shambles.

Stroud was granted a Market Charter in 1594 – The Stroud 400 Wall hangings are in Old Town Hall, The Shambles. (Many local societies took part).